Honiton resident, Kathryn Churchill, has been named as the winner of a prize in a Devon Loves Dogs prize draw.

Kathryn’s name was chosen at random from all the people who filled in a response to a survey about Devon Loves Dogs.

Kathryn won a free ‘dickie bag’ which lets you carry your dogs’ deposits to the nearest dog bin without experiencing any nasty niffs!

Commenting on her prize, Kathryn said:
“I love my new dickie bag – it will be really useful when there are no dog poo bins nearby.
“I think Devon Loves Dogs is a great idea, especially the dog code. As more and more people have pets, it’s really important that dog owners know how to keep them under control. My dog Milo is a springer cross staffie and he likes to be given space. You never know when a dog may be ill, old or not like other dogs, so only let your dog approach if permission is given.”

Julie Owen, from Devon Loves Dogs, said:
“Thank you to all the people who completed our survey.  It has given us some great ideas for the future of Devon Loves Dogs.  We had lots of positive responses and we are really delighted with all the support and kind comments.
“As a thank you for taking part, two winners were chosen at random. Congratulations to Kathryn, as well as Happy Dogs who won a feature business slot in our quarterly e-newsletter.” 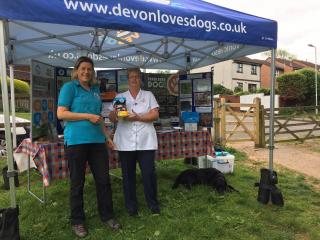